From Ancient to Modern Languages, we pride ourselves in offering as broad a choice as possible. French, Spanish and Panjabi are the three main Modern Foreign Languages we offer. These can be taken up to A-level. Mandarin Chinese is also available as an enrichment activity. Latin is also offered from Year 7 for selected students (approximately 60 pupils every year) and can be taken up to GCSE. Our latest offer is Ancient Greek, which students can learn in a weekly club. Our team is very enthusiastic and firmly believe languages really do matter and really do make a difference in a student’s future.

We are very proud to have added classical subjects in our offer of languages at Hamstead Hall Academy.

This has been made possible by the very generous support of Classics For All, The Roman Society, Cambridge Schools Classics Project and the Birmingham and Midlands Classical Association. These organisations have helped with teacher training and the purchase of high quality resources.

Around 180 students now study Latin and Roman civilisation at KS3 and the subject is also offered at GCSE level. We follow the De Romanis course book at KS3 and the Latin to GCSE course, both published by Bloomsbury. In Year 8, students prepare the OCR Entry Level Certificate in Latin and in Year 9 the WJEC Level 1 Certificate in Latin Language. At GCSE, we follow the WJEC Eduqas specification. The aim is to enthuse students in discovering not only the language but also the civilisation and literature of Ancient Romans.

Classical Greek is offered as an enrichment activity.

We follow the course published by Classics for All, ‘Basil Batrakhos’, which introduces students to the basics of the classical Greek alphabet as well as some mythological tales from Ancient Greece. After, we move to a more demanding course, delving deeper into the language and start discovering adapted texts by Ancient Greek authors.

Pupils at HHA have the opportunity to attend a weekly Mandarin Club.

Mr Gicquel spent a total of six weeks in China on an intensive course to enable him to teach beginners’ Chinese. The course was generously funded by Hanban (the Chinese equivalent to the British Council) which works to promote Mandarin teaching and learning outside China. Mr Gicquel also sat GCSE and the Chinese Proficiency exam in Shanghai. In the club, pupils are introduced to the basic principles of Mandarin, the tones and the complex writing system. They learn numbers, how to talk about themselves, their likes and dislikes, family and pets, nationalities…

They also learn facts about Chinese culture, customs and traditions. 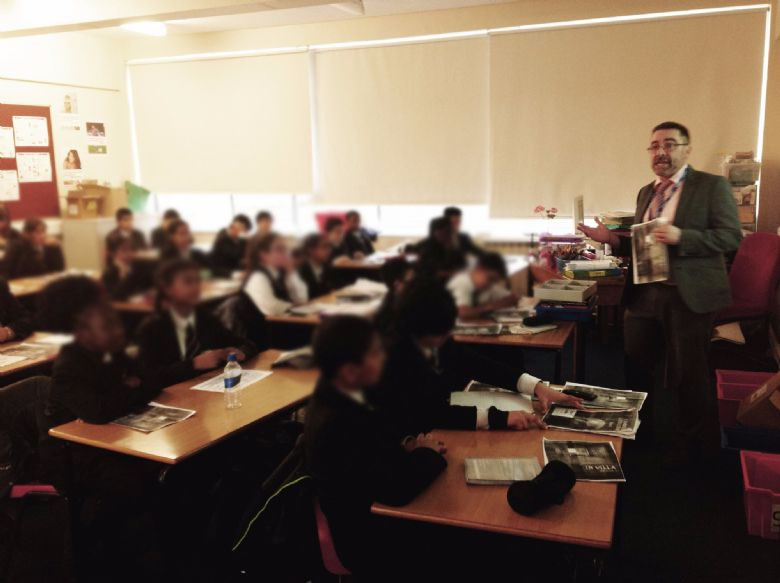